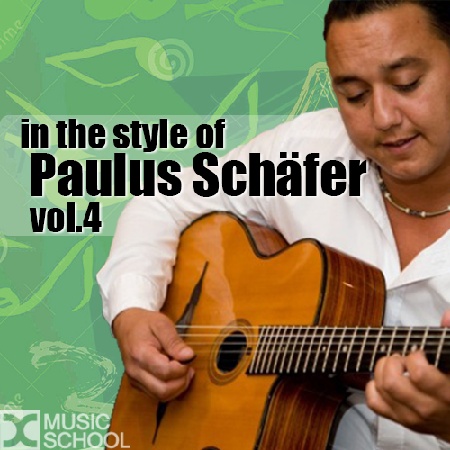 In The Style Of Paulus Schäfer Vol.4 - Free Bonus Lesson

FREE LESSON BROUGHT TO YOU IN PART BY: Django in June Read full description…

FREE LESSON BROUGHT TO YOU IN PART BY: Django in June

-HD video performances of Paulus improvising on standard changes; two picking etudes based on Them There Eyes; and a waltz.
-Fully transcribed in standard notation and TAB
-Backing tracks

Paulus Schäfer (born 1978) is today one of the most talented Gypsy Jazz guitarists from The Netherlands. Born into a Dutch Sinti (Gypsy) community he learned to play the guitar at a very early age. Besides listening to fellow Sinti and records of his idol Django Reinhardt, it was Wasso Grünholz – a legend within the Sinti community – and his nephew Stochelo Rosenberg from whom he learned the most. After a short period of time, in which Paulus briefly took over the lead guitar of Jimmy Rosenberg in the Gipsy Kids, he formed the Paulus Schäfer Gipsy Band and recorded his debut album “Into the Light” in 2002, followed by many concerts and numerous – headlining – invitations to jazz festivals: Sziget Festival Budapest (H), Khamoro Prague (CZ), IGGF Gossington (UK), Django Reinhardt Festival Samois-sur-Seine (FR), Gipsy Festival Anger (FR), International Gipsyfestival (NL), Amersfoort Jazz (NL), Haarlem Jazz (NL) to name a few.

Being a musician on high demand, Paulus is often to be found on stage with other musicians like The Rosenberg Trio, Biréli Lagrène, Stochelo Rosenberg, Fapy Lafertin, Jimmy Rosenberg, Tim Kliphuis, Feigeli Prisor, Andreas Öberg, Olli Soikkeli, Gonzalo Bergara etc. and can be found on many albums. He also recorded two more albums with his own group in 2006, ‘Desert Fire’ and ‘Live at the NWE Vorst’ with the Paulus Schäfer Gipsy Band and The Tilburg Big Band. In March this year he released “Twelfth Year”, in which he guaranteed the assistance of Tim Kliphuis, Nous’che and Stochelo Rosenberg. Two more albums are in preparation this year.
Paulus has a particular sound, easy recognised, and although all Paulus’ albums are true to a distinctive Gipsy Jazz/Swing sound; Paulus is always looking for a new modern sound. Not only to broaden his own horizons, but also for a more representative Gipsy Jazz sound for the 21st century.